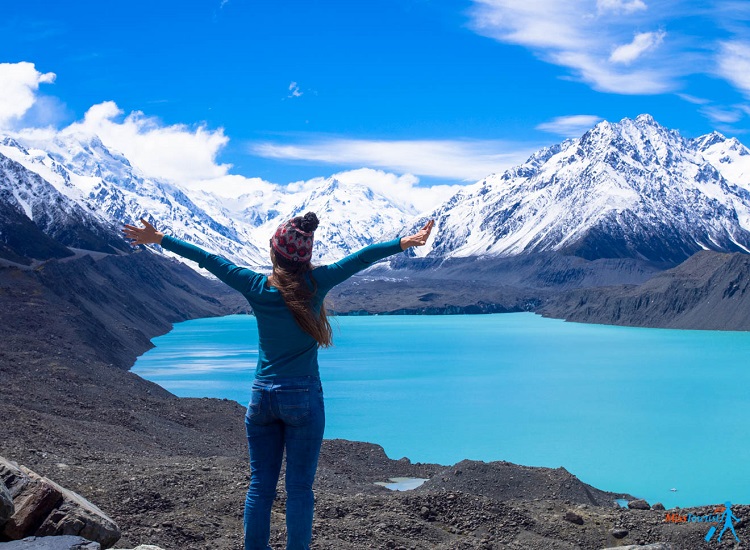 As Thanksgiving approaches, I would like to give thanks for a wonderful year of adventure travel and the many friends who have shared the journey with me. This year I enjoyed my first trip to New Zealand, my first land-sea tour of Alaska and my first music festival at sea. It is these first time experiences that help to keep the child in me alive, and I hope I never lose that sense of awe and wonder.

Now I would like to tell you about my journey from Florida to New Zealand. I had booked three back-to-back cruises on Holland America’s Amsterdam. The first cruise was to leave Auckland, New Zealand on March 30.

I had combined their New Zealand cruise with their repositioning cruise from Sydney, Australia to Seattle. Then I decided I might as well stay on board for their first Alaska cruise of the year. I would eventually return home on May 15th, but my first challenge was how to get to New Zealand without spending over 20 hours in transit.

I found that it was 13 hours from Los Angeles to Auckland on Air New Zealand, and six hours on a non-stop flight from Miami to Los Angeles. Then I added three hours to get to the airport and check-in, plus two hours for a layover in Los Angeles, plus one hour to get from the airport to my hotel in Auckland for a total of 25 hours of travel time. No thanks! There had to be a better way.

I had been to Honolulu on another cruise and wanted to see more of it. So I looked into the possibility of flying to Honolulu and staying overnight before flying on to Auckland. I found a flight on American that changed planes in Dallas. It left Ft. Lauderdale at 7:40 is and arrived in Honolulu at 5:45 pm. I would be in the air for eight and a half hours from Dallas to Honolulu, but that sure beat 13 hours from Los Angeles to Auckland.

My total transit time from home to the Hawaiian Hilton in Honolulu was 18 hours. I could have shaved off two hours by taking a different flight, but I wanted to arrive in time for the free Friday night show and fireworks on the beach at the Hawaiian Hilton. Watching the fireworks through the palm trees is one of my favorite memories.

The next day I had arranged a late check-out as my flight on Air New Zealand didn’t leave until 9:30 pm. The Atlantis Submarine was docked next to the Hawaiian Hilton, so I enjoyed the afternoon under the sea with lots of beautiful fish and shipwrecks.

I spent nine hours on Air New Zealand, but it was half full. I got four middle seats to myself and lay down. My flight arrived in Auckland at 5:45 am, and I went straight to my room at the Sky City Hotel where I slept until I woke up. I had let the hotel know I would be arriving at this time so they had a room ready.

By breaking up my air travel with an overnight stay in Honolulu, I felt much more relaxed throughout the two-day journey than I would have if I had tried to fly to New Zealand for adventure travel in one day. Plus I would have missed the fireworks and fun at the Hawaiian Hilton.

You Should Know All About Napkin That Uses in Restaurant

The Best Things to Do in Bratislava for Adventure Travel

Couchsurfing to the Rescue for Adventure Travel