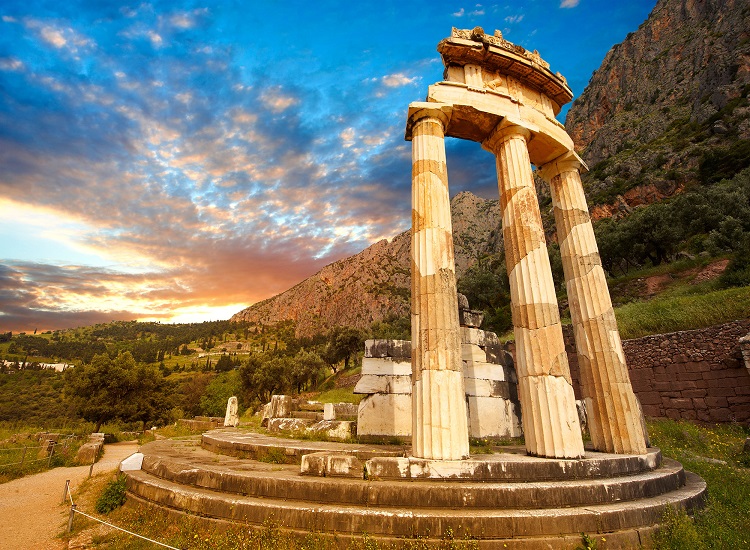 The joy of fleeing the city of Athens was only somewhat diminished by the truly deplorable service at Europe Car.  Two and a half hours later (and after walking up and down the arrivals hall of the airport looking for the Europe Car kiosk only to eventually be pointed to a gentleman eating a sandwich in a cafe who dared to proclaim “what, you didn’t see the sign” while pointing to the placard lying face down on the counter when we asked if he was the Europe Car representative) we were blissfully taking in the hilly vista on our way to Delphi.

The ancient temple site of Delphi is located on the beautiful slope of a verdant mountain overlooking a stunning valley.  The hike is entirely uphill and your approach is just as the faithful did thousands of years ago.  The first stop is the shopping arcade.

At one time, the perimeter of the square was roofed and merchants kept their shrines and offerings in the arched storage rooms behind their shops. After purchasing your offering, you traveled uphill past small shrine temples to the bank.

Higher up is the once-glorious Temple of Apollo.  This was the sanctuary of the Oracle. I was deeply disappointed that I didn’t see any writhing virgins like in the movie 300 – such is life.

Further, still, you can see how imposing the temple must have been and what a prime view of the valley it has.

The theater and the stadium were the final structures to see and I think that you will find the fact that the athletes competed naked to be just as interesting as I did.

A bit further down the road from the temple site is the Tholos and the sanctuary of Athena. Ruins of earlier temples littered the ground.

Up and over the imposing mountains we traveled, making sharp turns with stomaches clenching as sheer drops loomed ever closer. It was about two hours into our journey when we realized our GPS wasn’t working.

Lost in the remote and deserted mountains of central Greece we stumbled our way to Meteora relying on the (thankfully) working GPS on my phone.  The drive took much longer than we expected, but as the incredible rock formations loomed in the purple twilight, it was more than worth the effort.